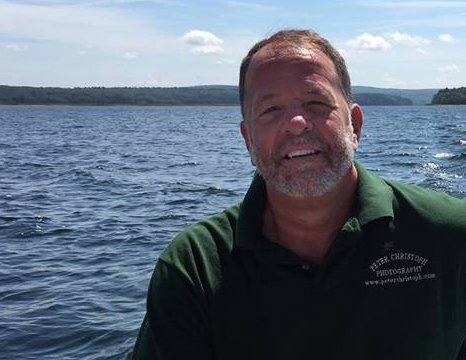 Peter Christoph is a prominent New England wildlife photographer, speaker, and author from Lancaster, MA. Many winters ago Peter built a rustic cabin along a river in an area known as the North Quabbin Woods. It was from this base camp that he developed both his love for birds and his skills in photographing them.

Peter’s passion for capturing birds in their natural habitat, his technical excellence, and his artistic vision are revealed in his compelling images. His bird images have received widespread exposure in several magazines and magazine covers. By sharing his photos, Peter hopes to help people appreciate, respect, and assist in the conservation of our feathered friends. Peter has taken a special interest in helping to restore the declining American Kestrel population in Massachusetts by installing several kestrel boxes in collaboration with Mass Audubon, the MA Division of Fish and Wildlife, and the Trustees of Reservations.
———————————

PETER CHRISTOPH BIO (no permission required to copy for Press Release)
Peter Christoph is a well-known wildlife advocate, naturalist and award-winning wildlife photographer based in Lancaster, MA. He has a great respect for wildlife and through his presentations seeks to raise awareness of the need to conserve bird habitat. Peter has presented at photography groups nationally and locally, including the Photographic Society of America (PSA), New England Camera Club Council (NECCC,) and several camera clubs throughout New England. He is a regular speaker for the Appalachian Mountain Club, Mass Audubon and the National Wildlife Refuge System, as well as numerous birding clubs and dozens of libraries. Peter is Chairman of the Massachusetts Camera Naturalists (an invitation-only nature group), and is past president of the Camera Club of Central New England. He has been the recipient of many prestigious national and international awards and gold medals recognizing his photographic talent. Peter is also responsible for publishing three bird photography books, including his latest “The Art of Bird Photography.”